WoodScaper combines into one unit the 4 classic guitar effects : phaser, chorus/flanger, wah-wah and tremelo. Besides the familiar controls each effect has some extra not-so-commonly-found options. The 4 effects can be routed in series (pedalboard mode), parallel (DAW mode) or some combinations of those modes. Panning or the Stereo control can create stereo sounds from a mono input source. WoodScaper is both stand-alone and an AUv3 effect. - All LFO’s can be set to different waveforms : Sine, Square, Saw Up, Saw Down, Triangle.  - All LFO frequencies can be set to a bar fraction (1/4, 1/8 , …) of the BPM or can be set free to a specific rate   (independent from the BPM).  - All LFO phases can be reset with a button.  - All effects have an On/Off (parallel routing) or On/Bypass (serial routing) switch like on a pedalboard. The switches can  be toggled by Midi CC’s.  - Phaser has settings for number of poles, frequency range and modulation flavour.  - Phaser has second LFO to modulate filter Q.  - Chorus has feedback, HighPass, LowPass and Saturation.  - Wah-wah control can be LFO, Envelope, Envelope + LFO, side chain, Midi note velocity or Midi CC 1 (mod wheel).  - Wah Envelope has Attack, Release and Threshold or Sensitivity controls.  - Wah can go up or down.  - Wah filter type and Q can be set.  - Tremolo has 3 types : Amplitude, Ring or Harmonic.  - Harmonic Tremolo has cross-over frequency control.  - Tremolo has a Threshold control to have more tremolo when the signal increases.  - Tremolo has “Biased Tremolo” mode to get more tremolo when the signal decreases.  - Has a global Input and Output Gain control.  - Has 2 extra LFO’s to modulate most parameters (rates, depths, …)  - Modulation LFO’s have their own slew rate control and a random mode.  - Presets can be stored in iCloud Drive (makes them available on all your devices).  - Presets can be switched with Midi Program Changes or a Midi CC (up or down)  - Major controls can be set with Midi CC messages. 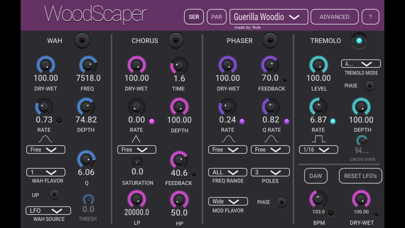 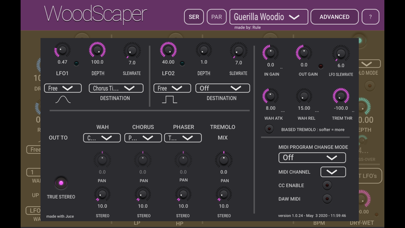